Extended Tracking utilizes features of the environment to improve tracking performance and sustain tracking even when the target is no longer in view.

Extended Tracking allows the tracking a degree of persistence once a target has been detected. As the target goes out of view, Vuforia uses other information from the environment to infer the target position by visually tracking the environment. Vuforia builds a map around the target specifically for this purpose and assumes that both the environment and target are largely static.

Use this feature to facilitate creating more robust applications, because any augmentations attached to these Targets will persist. In practice this means that after you point your device away from the initial Target, any augmentations maintain their positions with respect to the real world and are consistent with the initial reference frame defined by the target. The more detailed and feature-­rich the environment, the better Extended Tracking works.

Let’s see how this works with regard to pictures and scenarios that use the new Vuforia Samples, which contain an Extended Tracking toggle in the options. The following example depicts the effects when running the Image Targets application with this toggle selected. 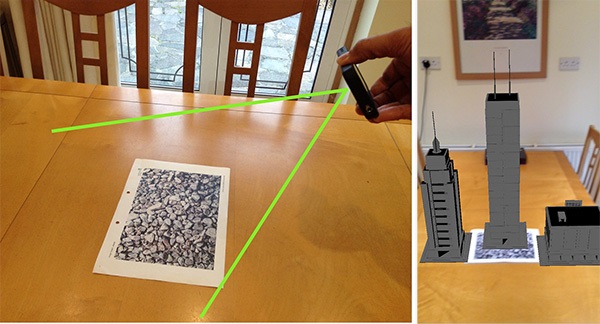 As Figure B shows, the augmentations of buildings on top of a wooden table are displayed on the screen of the device. This encourages the user to pan to these items by moving the angle of the camera to point upwards, thereby making the Stones Target disappear from view.

In previous versions of Vuforia, this led to all augmentations disappearing, because the Target reference frame is lost. With the Extended Tracking feature, the buildings remain visible even when the Stones Target is not in the camera view. Figures C and D illustrate this: 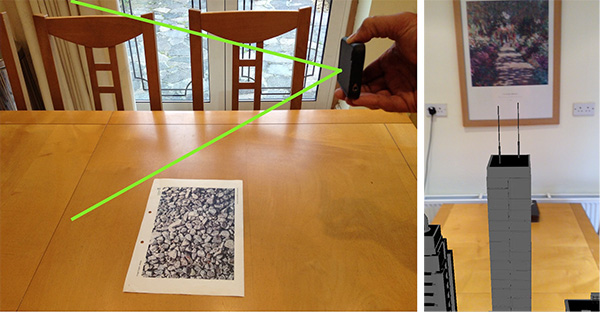 Note that after the Stones Target goes out of view it is not required for further display of the augmentations if this feature is enabled. That means that the augmentations persist without the target, and this capability supports more robust and continuous AR experiences.

Note that after the Stones Target goes out of view it is not required for further display of the augmentations if this feature is enabled, i.e., the augmentations persist without the target, and this capability supports more robust and continuous AR experiences.

What if the environment or target is not static?

By default, Extended Tracking assumes that the environment the camera sees is mostly static. The Extended Tracking map will continually expand, so new objects added to the scene will become part of the map. This does imply some extra background processing to managing and optimizing the map which could be perceived as slow-down in the app if there's a lot of other processing going on. If a large part of the scene moves, it risks pulling the map with it and negatively impacting the offset accuracy between the target and the map. This offset may be recomputed when the target is tracked again. If only a small part of the scene moves, then it's possible that a negative impact to the offset may be minor and go unnoticed thus introducing small error in accuracy of extended tracked pose estimates. In this way, larger scene changes can sometimes be less problematic than more subtle ones.

If scene changes or changes of the target location are expected, then the application should NOT use Persistent Extended Tracking (PET). Not using PET is the safer approach here, as the map will be reset whenever tracking stops for a few seconds. PET should only be used if:

With persistent mode turned on, Vuforia never resets or rebuilds the map during extended tracking. Instead, there is a dedicated resetExtendedTracking API (see below) that puts this in the hands of the developer. The application can keep the map for much longer, providing a seamless experience if the device is put down or the camera is stopped temporarily. Furthermore, if an additional target is detected and tracked, this target is appended to all existing targets that are being tracked.

Text and Frame Markers do not support Extended Tracking.

Under certain conditions, Extended Tracking can work with multiple targets, but be aware that all targets need to be in the right scale with respect to each other.

When Vuforia is configured to track one target at a time:

A target may still be extended tracked when it is out of view. Only when that target has lost tracking can a new target be tracked.

When Vuforia is configured to track more than one target simultaneously:

How To Use The Extended Tracking API

The following is a description of the API with examples of how to implement Extended Tracking in native code and Unity.

Remember that this applies only to the following Trackable types, all of which are subclasses of ObjectTarget:

Text and Framemarkers do not support Extended Tracking.

In Unity, implement this feature by ticking the Extended Tracking option in the Inspector, so that using an API is not mandatory. It can, however, be useful to understand how to control it using scripting for use in advanced scenarios.

How To Implement Extended Tracking

The following code groups show how to add extended tracking to the Chips Image Target within a standard Image Target application.

The code for Android and iOS shows a modified loadTracker() function (with the updated lines in bold) that goes through the dataset on startup and calls startExtendedTracking() when it finds the chips target.  In this instance the function is implemented in the startup functionality for the sake of convenience, but this function can be called at any time.

The following C++ and JAVA code is used to initialize this feature on Android.

You can find this original code in the sampleutils.mm file in the Image Targets sample. This code snippet shows the context in which Extended Tracking is enabled.

To enable Extended Tracking for an Image Target, you must check the corresponding checkbox in the Inspector when it is highlighted. As the following figure shows, you can find Extended Tracking under the target behaviour component in the target's inspector:

If the application must dynamically enable or disable the extended tracking at run time, you can use the Extended Tracking API's startExtendedTracking and stopExtendedTracking methods as illustrated in the following code example: